This series of posts will summarise the D&D campaign that I started running in Stockholm. This campaign is based on the published adventure Waterdeep: Dragon Heist (spoilers)!

Uthemar is a teenager from the Margasters, a noble family from Waterdeep. His family house is located in the North Ward. Uthemar has seven siblings, but he doesn’t get along very well with them. Over the time, he has grown tired of all those family ceremonies and dinners with other noble families (to the disappointment of his father). Fortunately, he found a way to escape his daily routine: Sev often sneaks out of his bedroom via the window and adventures in the streets. For this purpose, he has created a second identity and usually introduces himself as Sev.

Xanaphia  is the youngest of a family of four wood-elves. She works for the Margaster family as Guardian of the garden. She took residence in a tree and literally lives in the family garden. From this position, it didn’t took her long to notice the sneaky expeditions of the young Uthemar. Although she chose not to denounce him to his parents, she feels responsible to keep an eye on him and sometimes accompany him out in the streets of Waterdeep.

Morgran is a former war veteran. When his life as an accomplished soldier started to feel a little too dull, he decided to find shelter in a monastery to try another path in life. The teachings of the monastery are a little unclear to him. However, he did become a little bit stronger in martial arts (and much stronger at drinking beer!). This new learnings (especially the drinking part) make members of his clan (Foamtankard) proud of him.

Yet another day at the Yawning Portal

Once again Uthemar decided to sneak out of the family domain. This time he had to play sick to avoid another boring brunch invitation with the whole family. While moving through the corridors, Uthemar heard from a servant that somebody had brought an uncommon creature in the city (an elephant). The beast was now parked in the street near the Yawning Portal, an iconing tavern in the Dock ward featuring a massive well in the center of the main room. Xana saw Uthemar once again climbing down by the window. She took him through to a secret passage she maintains hidden between bushes. The two of them made their way to the Yawning Portal.

Arriving at the Yawning Portal, the elephant was drawing a lot of attention. Xana went closer and successfully appeased it. Meanwhile Sev entered the tavern and started catching up with her friend Yagra (female half-orc). As Sev went out to find Xana, the group saw five individuals in black outfits entering the tavern. A few seconds later, a fight broke. Yagra was being beaten down by the newcomers. Sev decided that this was the perfect opportunity to search the pockets of people in the audience…

The brawl was interrupted by a growling sound coming out from the central well. People started screaming and running out of the place, as a TROLL came out of the well! The bartender Durnan took out a massive sword from behind the counter and charged the monster. Xana and Sev joined the fight. A group of stirges attacked the group and went back sucking the troll’s blood after having tasted a bit of Sev. The troll was managed without too much trouble.

Xana and Sev’s performance in the fight brought the attention of Volothamp Geddarm (male halfling), who introduced himself as a successful author and researcher. Volo went to find Sev and said that he was looking for help. His friend Floon had been missing since last night. The last time he was sawn was at another tavern called the Skewered Dragon. Volo promised 100 dragons (gold pieces in Waterdeep) as a reward to each adventurer who would take part in this quest. Sev accepted the quest without even telling Xana about it. He also invited his friend Morgran to join the party.

Looking for Floon at the Skewered Dragon

The group decided to investigate at the Skewered Dragon. On their way there, they passed a street that was blocked by members of the City Watch. It appeared that a fight had occurred between  members of two factions. Xana questioned the guards but they would not give any more information. “Get out of the way”! Sev entered a shop nearby (the Xoblob Shop). The only thing he found was a weird gnome trying to sell him some random purple trinkets for an outrageously expensive price. Morgran asked a passerby and learnt that a conflict had been escalating recently between the Black Network and another group.

At the Skewered Dragon, the group learnt from the bartender and some patrons that Floon stayed later that night, after Volo had left. He was accompanied by Lord Renaer Neverember (the son of the previous Open Lord of Waterdeep, Lord Degault Neverember). When the two of them went out, a group of individuals (probably from the Black Network) followed them. Nobody knew what happened after this. However the bartender told the group that these individuals were often seen hanging around a warehouse in Candle Line, a shady alley in the Dock ward. “Look for the symbol of a snake on the door”, he said.

How not to sneak into the warehouse…

The warehouse had to be explored. But how to make sure that nobody would be suspicious when a random group would approach it in this silent alley? The group decided to play drunkards and approach the place while making as much noise as possible. In Candle Lane, the warehouse was easy to spot. It was surrounded by a fence. Xana had a closer look at the portal which opened instantaneously as soon as she put some weight on it. Although the windows had been darkened with some black paint, Xana noticed some movement behind the window (nat 20!) and under the door slit. Sev went to the main door to try and pick up the lock. At the same time Morgran approached the window and used his quarterstaff to try and quietly break it open and… (nat 1!) Morgran misjudged his strength and shattered the window, his weapon falling into the warehouse. He immediately jumped in to get his weapon back and was ambushed by a bird-like creature. Kenkus! 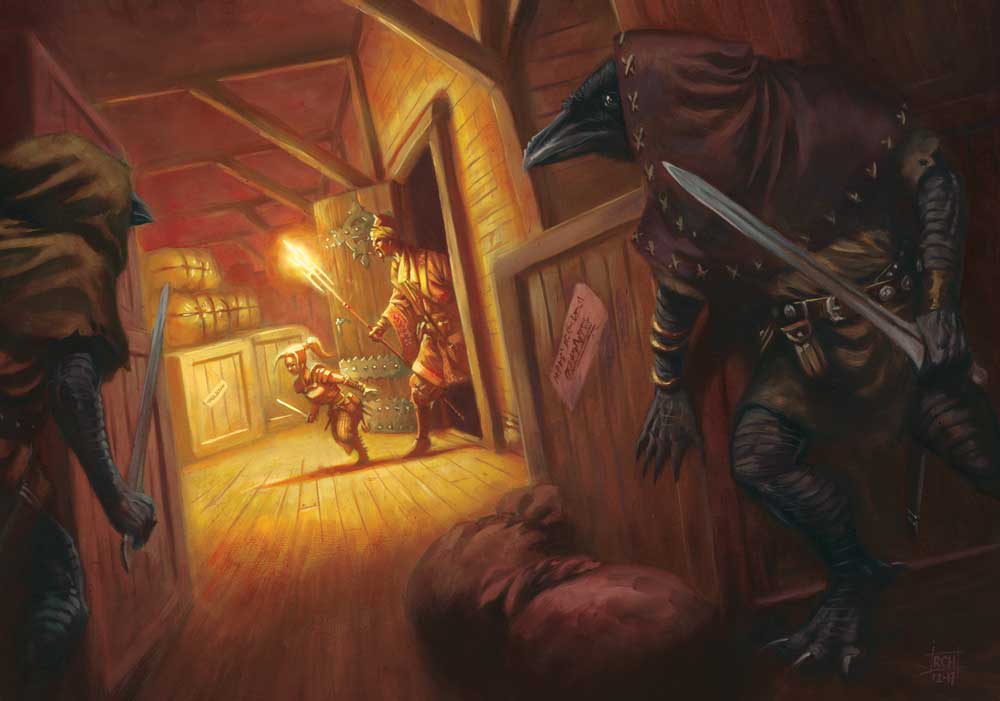 The kenkus were (not surprisingly!) expecting some visit. The group quickly defeated the first one but three others hidden behind boxes started firing at them with their shortbows. Sev created the illusion of a box and hid within it to avoid the next volley of arrows. Unfortunately the kenkus saw him casting the spell and got lucky enough to hit Sev while shooting blindly at the fake wooden container. Sev felt unconscious. The fight was tight and the situation was definitely not under control. Fortunately Morgran turned into a killing machine and got rid of another kenku, before throwing a dart right into the butt of a third one who started shooting arrows further down the warehouse. Xana used her magic to bring Sev back on his feet. Meanwhile the two remaining kenkus were trying to escape via the main door. One ran away in the streets of Waterdeep, but the party managed to knock out the other one.

The adventurers decided to bring the unconscious kenku back into the warehouse to avoid attracting too much attention. Morgran investigated the second floor and found a note written in an unknown language. The note was written on an orange paper and folded into the shape of a bird. Morgran also took four rapiers with him.

Sev checked a storage closet and found… Lord Renaer Neverember! Renaer was hiding there. He thanked the group for saving his life and shared that he was feeling guilty. According to him, the Zhentarim (also known as the Black Network) had mistaken Floon for him.

As the group was packing the kenku into a bag to bring it out with them, Captain Staget burst into the warehouse, accompanied by a dozen members of the City Watch. The captain questioned the group. They tried to lie about the content of the bag but the Captain could feel that there was something fishy. The kenku was discovered. Captain Staget advised to leave the scene. For this time, the adventurers would not get into troubles (he still gave them a copy of the Code Legal and warned them about future misbehaviours).

Just as the party was leaving, the kenku started convulsing and started repeating: “The Xanathar sends its regards! Tie up the pretty boy in the back room! Follow the yellow signs in the sewers. No time to loot the place. Just get him to the boss!”

Morgran, Xana, Sev and Renaer made their way to another tavern. On their way, Morgran sold the rapiers to a merchant (for what he believes was a good price!) and used the dragons to buy a healing potion from another store (he tried to seduce the human shop owner and failed big time).

Once at the inn, Renaer explained: “The Zhentarim think that my father had embezzled a large amount of gold while he was Open Lord of Waterdeep, and that he had hid the dragons somewhere in the city. They think that they can find it by using an artefact called the Stone of Golorr, which was in the hands of the Xanathar Guild until recently. But apparently, someone stole it.” When asked if there was any reward for saving his life, Renaer answered that he would be ready to help in the quest of finding Floon.

View all posts by Timothée Astier